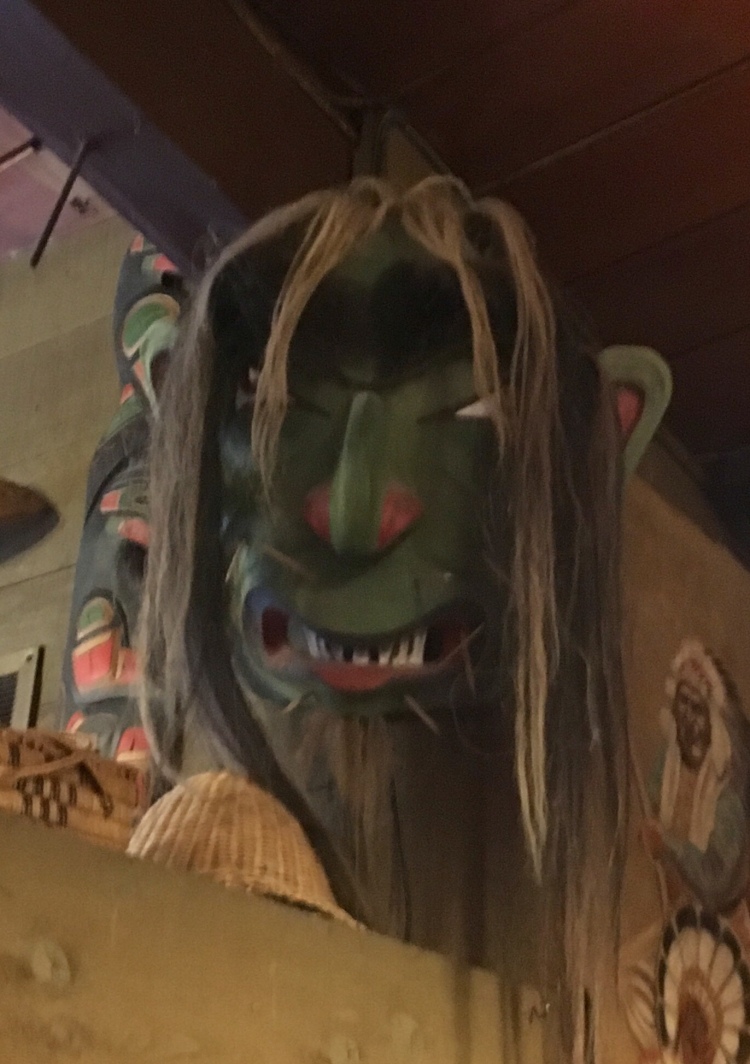 I believe in Aboriginal Enhancement agreements.  For some, they represent a token of political correctness which can be limited to lip service.  For others they focus our attention on something that matters not only in terms of facilitating basic human rights, but developing a culture of kindness and respect that we as Canadians have built our identity on.

John Hattie points to a large body of research that informs us that the largest predictor of health, wealth and happiness is not grades achieved by students, but the number of years spent in school.  Low graduation rates of indigenous students have meant that part of our job as educators is to create a learning environment in which all students find something to stay for.  Obviously we want this for all of our students.

Daniel Wood wrote an article in the travel section of The Vancouver Sun newspaper (Apr.28, 2018) on Easter Island:  “And once the last tree was chopped down, there was no wood to make a boat and leave.”  The habitat once plentiful with fish, birds, palm trees and fertile lands was left an archeological site on grassland.  Like those who inhabited and devastated Easter Island thousands of years ago, we too have much to learn.   The FNESC materials give us with tools and insight into how we can draft meaningful goals to incorporate indigenous ways of knowing into our curriculum. 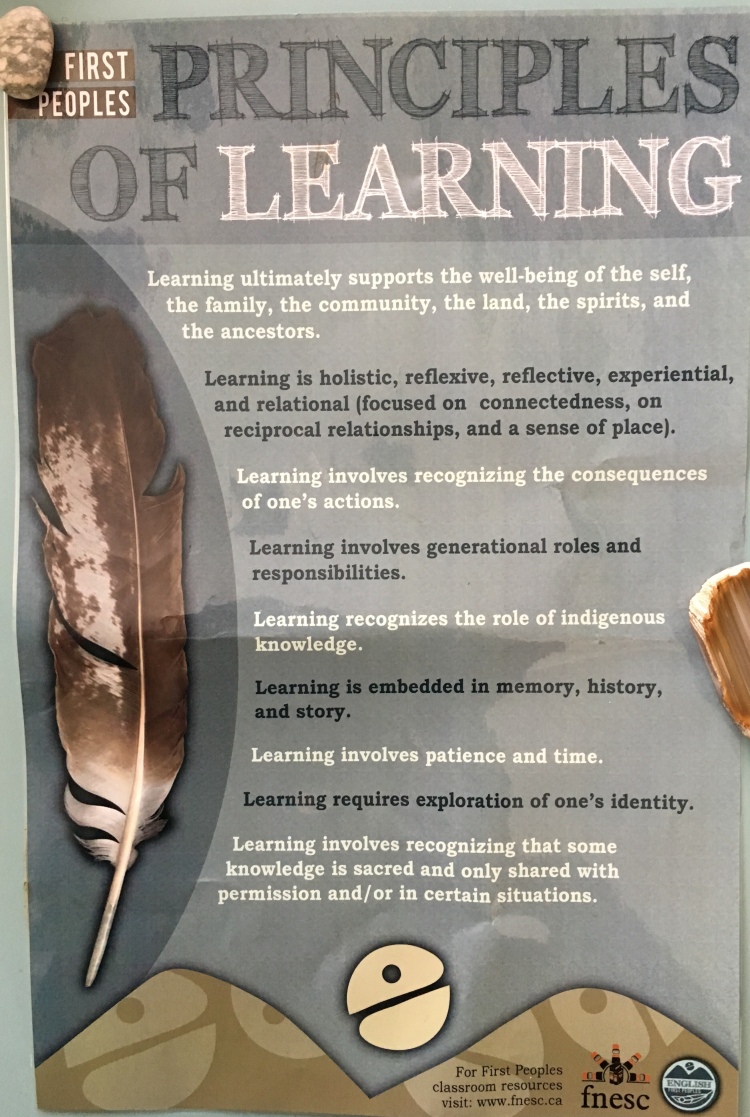 What is frequently lacking is a clearly articulated learning intention so we can determine if we are making an impact.  From this intentional stance, we are able to devise a plan that serves the needs of all of the students in our care:

In response to stereotypes of indigenous culture that have pervaded our culture, and appropriation of cultural items to gain profit, we are left unsure of truly what is respectful.  Anthropologist, Aaron Glass states in his interview with Heather Ramsey of The Tyee ( March  2011):  “Totem poles, he says, have been added to the stereotype of the North American Indian, along with the teepee, the tomahawk and the feathered headdress.”  If we are earnest in our intention, this fact makes us wary when we see these images and concerned that we may be perceived as a part of the system that perpetuates negative stereotypes and gets in the way of developing respectful relationships.

The Tomahawk Barbecue was the first drive-in restaurant in Vancouver started by Chick Chamberlain in 1926 just off Marine Drive.  Chick learned to cook in the early 20’s when he opened a small coffee shop in a cabins to rent business with his brother.  The drive-in part of the restaurant wasn’t a huge success because of the dust from the unpaved roads.  It did evolve as a community hang-out.  One of the patrons of the restaurant mounted a big tomahawk over the door and the name stuck.  It managed to stay open through the “Dirty Thirties” largely because Chick would accept payment in curios, hand made pots, drums, cooking utensils, large and small totem poles, masks and other beautifully carved objects from those who couldn’t afford the food.  He started to purchase indigenous art long before it was recognized as valuable.  “Tomahawk’s famous hamburgers are named after some of the Indian chiefs Chick had known over the years, as a sort of memorial to his friends: Skookum Chief, Chief Capilano, Chief Raven, Chief Dominic Charlie, and Chief August Jack.”  Chuck Chamberlain is Chick’s son and has maintained his father’s legacy.  Chuck was happy to share stories of the his Dad, his restaurant, and his friends over the years when I came for breakfast on a rainy Saturday morning.  A painting of Chief Simon Baker graces the wall when you enter.  Chuck is proud of this friendship and was honoured to be a pall bearer at Chief Baker’s funeral.

The story that was most powerful was the story of the Wild Man of the Woods Mask used in the Squamish ceremony of boys moving into manhood.  When the mask is needed for a ceremony, it is taken down from the special resting spot in the restaurant, and once it’s purpose is fulfilled, it is returned to a place where it rests with the spirits of the ancestors.  This is so different than the experience of another friend of mine who is a member of the Squamish Nation.  He took a special basket made by his grandmother to the Museum of Anthropology with an inquiry about how best to preserve it.  The Museum of Anthropology explained they could help.  When my friend and his family returned to request it for use in a special ceremony, they were denied access.  Two similar scenarios with the biggest difference being the respect demonstrated and the dynamic of power and control. 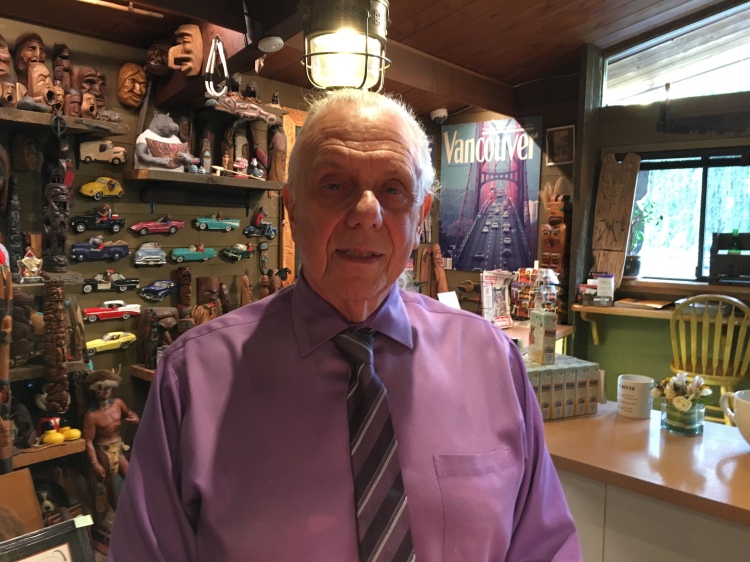 I remember going to the Tomahawk Restaurant for breakfast as a very little girl, one weekend when my aunt and my Mom ventured over the Lion’s Gate Bridge to go to Capilano Canyon with my sister and cousins.  My husband remembers not being able to finish the Skookum Chief burger, nicknamed The Hulk burger, when he was a little boy.  Yet, I paused to return because of the name – Tomahawk.  As a student of history and an educator wanting to rectify past wrongs, I had many questions.  Was it respectful?  Was it appropriate?  Was it a remnant of past uninformed representations of indigenous culture?  Tomahawks were from the prairies, weren’t they?   It wasn’t until I did some internet research, listened to an interview and did some the reading, that I gave myself permission to return for a visit and a questions to ask.  And yes, I was dying to see the art.  While I was there, chatting with Chuck, I kept thinking of the First Peoples Principle of Learning:  Learning is embedded in memory, history, and story.  Listening to the stories always needs to proceed formulating the judgement.  What I heard on Sunday, was pride in respectful relationships and families that have become intertwined over many years.

Recently I cited Byrd Baylor’s book, Everybody Needs a Rock in reference to an Indigenous sharing circle of large boulders that we are installing in our playground.  The intention is to help students understand the very beginnings of the concept of democracy in giving everyone a voice.  One of my respected colleagues, questioned my reference to a non-indigenous author.  Again I did some internet research to discover that she has maternal Native American decent but grew up in a largely non-indigenous culture.  However I went back to the First Peoples Principle of Learnings:  Learning is holistic, reflexive, reflective, experiential, and relational (focused on connectedness, on reciprocal relationships, and a sense of place).   Ultimately, isn’t our intention for all people to embrace these principles because it represents universal learning that matters.  And isn’t it our intention for all people to share the stories that come to form their understandings.

Anthropologist, Aaron Glass also stated in his interview with Heather Ramsey of The Tyee (March  2011):  “What we argue in the book is that the totem pole has been a constantly evolving form, so there was never a moment when “it” almost died. It kept changing, migrating, transforming. This is not a story of death and rebirth it is a story of continual transformation.”  As with the totem pole, the relationship between indigenous and non-indigenous people will continue to evolve and transform as we open ourselves to new learning.  Hopefully this time we get it right, and that relationship will be based on respect, honesty, shared power, and a willingness to be open to learning from each other.