“I Believe in You!”  This is the mantra of my daughter.  To my chagrin in secondary school, she joined the Cheer Squad at Charles Best Secondary School.  I saw the objectification of women.  She saw the comradarie of the cheer squad and the physical challenge.  It has served her well.  She bought into the importance of encouragement.  As a tiny little girl who only wanted to be with her Mommy, she experienced the encouragement to go out into the world on her own.  In Kindergarten, her teacher nicknamed her Sparky because she brought palpable, positive energy into the classroom every morning.  As a competitive soccer player in school, she witnessed the power of encouragement to impact her performance.  In cheer, she learned why cheerleading came into being. 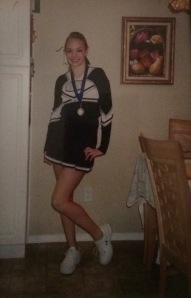 I worked very hard to interest Larkyn in attending UBC for selfish reasons of my own.  Her quest for adventure and independence, took her off to Queen’s University.  She made a group of friends that negotiated the ups and downs of university life.  Visiting her and her housemates was always refreshing.  The young women who she pulled close to her, were people who demonstrated the same encouraging way of being.  “I believe in you” was often uttered as a young woman with the unbrushed hair in a sock bun emerged from her room with a scowl on her face to take on some assignment or test or interaction that she was not feeling particularly good about.  In this case, “I believe in you” was not a statement assuming success would be the end product.  It was a recognition that her friend was doing something hard.  It was a promise that at the end of the day, success or failure, you were still someone who mattered.

I had an adoring mother who believed I was wonderful and always assumed success in my ventures.  My steadfast determination assured a fair record of successes.  However failure meant not only failing at an intended task, but also disappointing her.  It is something to this day that I experience.  Missing the mark and disappointing the people who really want my success, results in the heavy heart times two.  Perhaps this is residual from being a little girl with blonde ringlets and an over reliance on pleasing.  I do find the “I believe in you”, received and delivered with a smile, has a more positive impact.  It’s like being sent off with a hug of reassurance.  It doesn’t presume an outcome, just the encouragement to “Go for it” and acknowledgement that you’re taking a risk that is hard.

In Grade 3 due to a significant family upheaval, I ended up in a new school after the beginning of the school year.  Peer groups were already established and I was doing poorly on daily timed math drills.  My Mom suggested I talk to the teacher about what I could do to improve.  The teacher told me not to worry about it, I was in the average range.  My take away was that she didn’t believe in me and my belief in me faltered.  It took me until my statistics class in Graduate School to discover I didn’t actually suck at Math.  We have huge power as educators to deflate or inspire.

“I believe in you” is a message that inspires people or at least may help them lighten up.  It isn’t the belief that success is imminent.  It isn’t the belief that failure is an opportunity to teach you an important life lesson.  It’s the statement, “You’re on my team!” and the commitment to cheer for you no matter what!  Unconditional cheering.  Not a bad way to go out into the world and make our mark.  It is a message that I aspire to communicate to my staff, students, friends and family on a regular basis.