This has long been a favorite quote of mine that is beautifully depicted by George E. Miller II in my office. In my early years as an underemployed teacher, I worked in an out-of-school care centre in the basement of a school in Vancouver. This is where I first learned the importance of community in the life of a child and it took a firm place in my educational philosophy.   Hillary Clinton popularized this old African teaching into mainstream consciousness.  It is assumed in many aspects of school but not always overtly.  On Thursday, June 4th, it was positively radiant during the community build of our long-awaited playground. Our school in on the South Slope of East Vancouver. Many new Canadians have made their home here and demonstrate a work ethos and commitment to ensuring their children have the opportunities for a better life with all of the advantages we have in Canada.  Money is hard-earned and expenditures are carefully considered.

In September, our rapidly decomposing wooden playground structure finally had to be removed from the school grounds due to safety concerns.   This was not a surprise but a huge concern.   The quest to replace the playground took on a renewed intensity because it left a huge gap in during and after school hours activity. Our playground has always been a place where families gravitate to before and after school. Groups came together to dance, participate in Tai-Chi and exercise while the kids play on the playground.  Almost 500 children attend elementary school, Cantonese and Mandarin after school classes and preschool programs on site.  Teachers used the playground as one way to ensure students are getting the minimum requirement of 30 minutes of daily physical activity.  The parents and students in our community have been our main funders of the playground.  Most of the money has come from hot lunch sales spearheaded and organized by PAC president, Sirtaj Ali, and two walk-a-thons organized and facilitated by PAC member, Susan Biln.  Student leaders organized a Movie Night and raised over $600.00. Casino funds, small grants, an RBC work party by volunteers and direct donations from neighbours and staff provided the additional funds required.

PAC and school administration chose Habitat to supply the playground equipment due to their reputation for service and durability of the product. Jeff Musson from Habitat stepped forward to provide options within our price range and planning considerations. Murray Stewart and the VSB grounds crew stepped up with the background of all of the logistical knowledge, support required to make the project happen. Overwaitea stepped forward to provide the people power required for a community build.

On our build day, the weather cooperated and over 36 Overwaitea volunteers, the PAC president, VSB staff and the Habitat staff converged on the school grounds to make this playground a reality. Before school, kids were stomping on cardboard packaging and putting it in the cardboard recycling bin. By recess, they watched in amazement as the poles were placed in holes and the structure started to appear before their eyes. By 2:30 pm, they were watching as the cement truck was dumping cement into a convoy line of wheelbarrows. As the cement was shoveled in the holes, I heard one little girl summarize the situation for her peers: “The cement means that we get to keep it.” 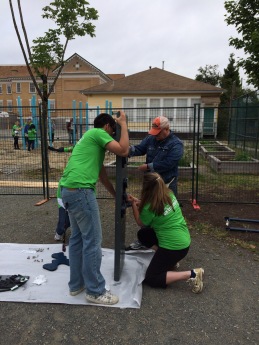 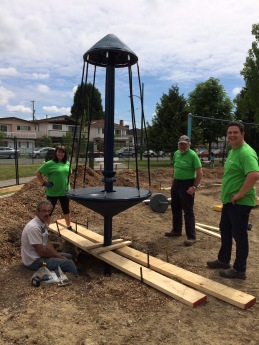 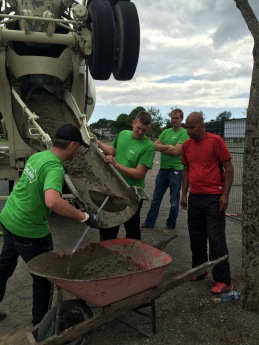 The school coming together with the community to make the playground a reality was one part of the equation. The most significant sense of community came from the actual people involved in the project. They were up early and doing tough manual labour in the heat of the day. There were no complaints or begrudging the work. There was pure joy in doing something that mattered so much. The fascination and excitement of the kids was paralleled by the delight of Overwaitea volunteers and Habitat staff.   They talked to the kids, responded to cheers and expressions of thanks from kids and adults alike with smiles, laughter and enthusiasm. At the end of the day, we were all exhausted but also filled with a sense of euphoria that comes with making a big different in your little part of the world. The VSB grounds crew continued to bring the playground project to completion with surfacing and final touches. We are now ready for our safety check and we are getting ready to celebrate and play. 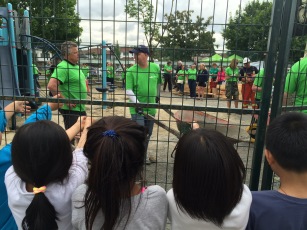 Special heartfelt thanks to all of PAC members, Overwaitea volunteers, VSB staff, Habitat staff and business community supporters who put their heart and soul into making the playground a reality and showing all of us “IT TAKES AN ENTIRE VILLAGE  TO RAISE A CHILD.” 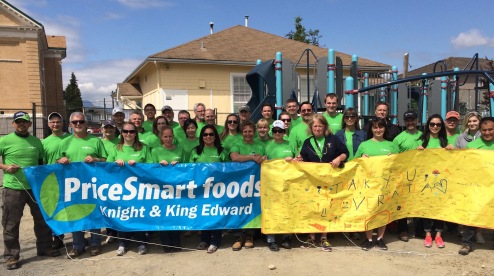 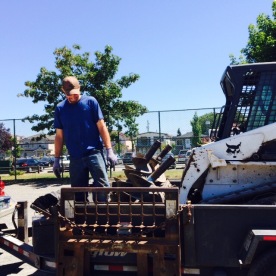 Curiosity guarantees a life of learning😀Questioning, writing, listening, taking risks as a principal, as a student, as a mother, as a wife, as a friend to keep on learning. View more posts